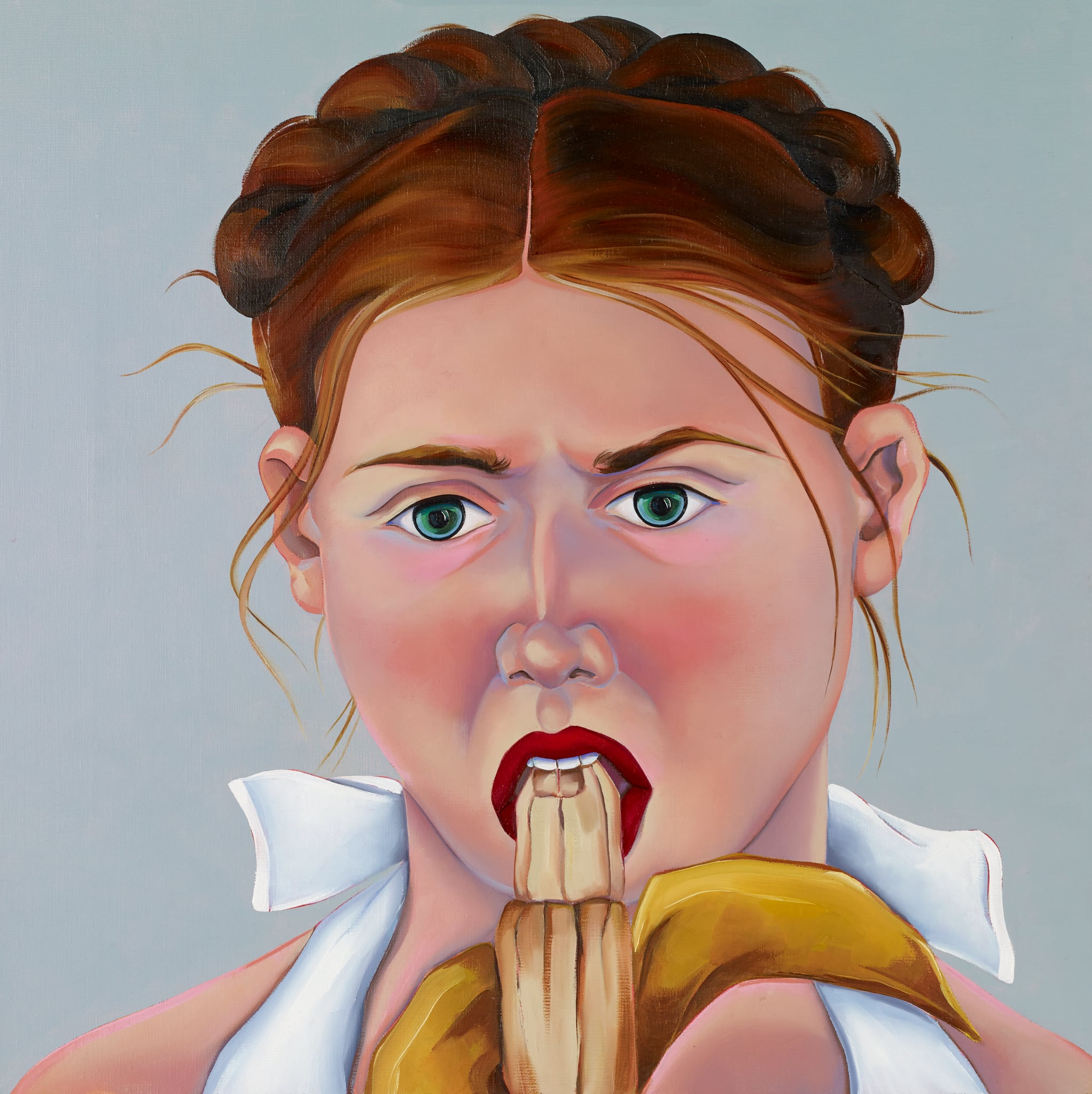 „Lo’s Appetite” is a series of paintings based on stills from the 1997 movie “Lolita” by Adrian Lane. Back then, when the movie was screened in the theaters, my mom forbade me to see it. I was 13 years old. Instead, I bought and read Nabokov’s book. In secret, of course. It marked me for life. Both excited and terrified I found myself mesmerized by the main character. I wanted to be like her. Later on, when   I finally rented the movie on dvd, it played exactly as  I imagined the story while reading it. I also found out that playing the once-missed movie in the background helps me focus on my work. I got obsessed with it and it became my meditative practice playing it over and over again when I’m in despair, to compose myself to paint. It was only fair to finally put it to the fore.

Ever since I return to the beloved topic I can't stop producing more Lolitas. With time she becomes more and more popular. My obsession starts to pay off. Quoting Nabokov, "Lolita was a difficult birth but a very grateful daughter.”

The series consists of growing number of paintings themed around Lolita. The aim is to capture ephemeral fruitiness and beauty of youth. To make them juicy and pretty, filled with this endless appetite for everything, a characteristic of young people. I don’t think I’ve managed to succeed at what I aimed for yet, so I continue. When I first read the book, I was afraid to recognize myself in the character. In later life I was consciously and unconsciously playing with the Lolita archetype. The more I dwell on it though, the more I understand that mirroring works both ways; I am just as Lolita as I am Humbert. I am both the object and the possessive creator. That’s why in all of those portraits you can find glimpses of my own face.

„Dear ladies and gentleman of the
jury, the exhibit number one is my portrait
photograph inside of this catalog.
Do you recognize a little deadly demon
in the pair of eyes looking straight at
you? When you examine this gaze
closely you may understand that I myself
am the engine of all my destructive
desires. Guilty as charged. I’ve had this
hunger for as long as I can remember.
There is a missing part of my soul
whose origin is inaccessible to my
consciousness. I keep looking into
strangers’ eyes searching for a reflection
of what I have lost.

Psychoanalysis has taught us
that when we fall in love we essentially
recreate a pattern learned in earliest
childhood. Is it then when my obsession
began? And what is it to recognize a wanted
element in one face selected from all the
others? Is an ancient story of familiar suffering
there? Such a desperate lack leaves one with
an unbearable rift calling for a higher
form of creation in order to bring some
relief. To escape madness, I sublimate
this craving into the work of art.

Speaking of which, does it really matter
whom or what we select as the
canvas for our obsessions? The artist’s
curse is that he aimlessly seeks an
empty surface to project his inner
flame. There is a huge danger in it, to
put it mildly; projecting our own thirst
in another we misrepresent reality.
A love object exists only in the laboratory
of our twisted mind. It is like a ghost
in bright colors we choose for it. To fill
such a deadly void with life would be
one’s suicide. But the poison is in the
wound, and the wound would not heal.

What lingers is a fear of dying. To catch
the momentary character of youth
is an impossible task. I am sad to announce
that I am failing in it, as well as
I am failing to sustain my own life at
this stage. Soon enough it will be a
distant memory that was once so clear.
Will I ever be cured? What I have left is
my unfulfilled appetite.

Loosing a love object is close to death.
The vacuum overshadows our instinct
for life and brings us to the verge of
insanity. Superstitious phantoms have
their own hunger for sustaining their
existence; they only live as long as we
fill them with meaning. But beside all
the suffering originated in the wounded
rift of one’s psychic, it is a poetic privilege
to be able to obsess. We keep
looking for the settlement. A way to
break the spell is to reincarnate this
hunger in another. ” Małgosia Malinowska